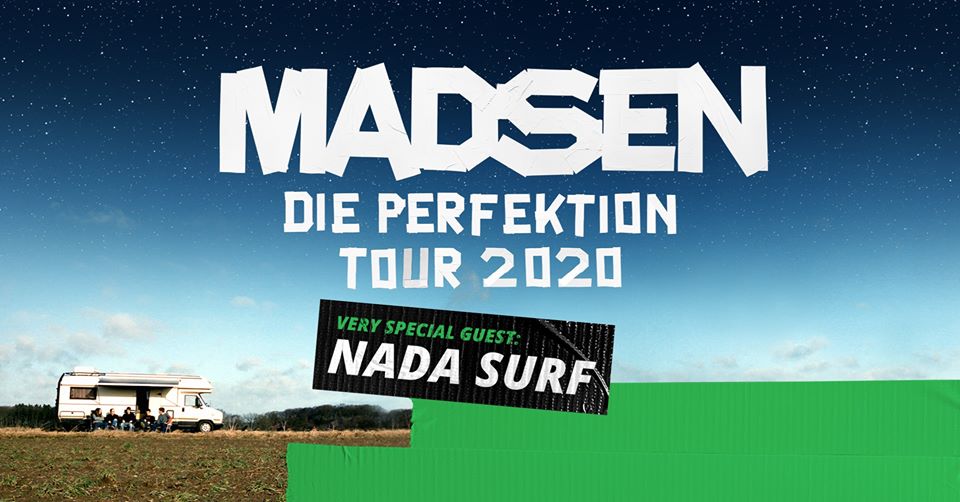 Madsen played their first major concert at the Berlin Knaack Club on November 4, 2004. The traditional location has long ceased to exist, but the Wendlanders have been rocking the stages of the republic for 15 years now.
And because celebrations are supposed to be celebrated as they fall, the boys throw a decent party in late autumn. Unfortunately, everyone who does not yet have tickets for the big anniversary show on November 29th in the Hamburg sports hall cannot celebrate. The concert was completely sold out in no time. But Madsen would not be the sympathetic and successful band if they hadn’t always pulled both legs for their fans. It was therefore quickly clear to the quartet: „For everyone who looks into the tube in November, we have to do more!“ No sooner said than planned: Madsen will go on the „Perfection“ tour 2020 in April and May.

Founded in 2004 in the tranquil Prießeck in Wendland, the three Madsen brothers Johannes (guitar), Sebastian (vocals, guitar, lyrics) and Sascha (drums) and their friend Niko Maurer (bass) quickly became one of the most successful by the local heroes German rock bands. They have released eight albums, the last seven of which made it into the top 10 of the German charts. No one counted exactly how many hundreds of shows they played at that time. Madsen was too busy filling the large halls and playing as a permanent guest at all German festivals.

With their unprecedented mix of distorted guitars, hymnic melodies and catchy German lyrics without any embarrassment, the band positioned itself from the start in its own section, in which there is only Madsen and in which Madsen is allowed to do everything. For this they are loved by their fans, to whom Madsen would now like to give something back: „We want to thank our fans with every show on our anniversary tour, toast to the past 15 years and are really looking forward to celebrating with them . “
Madsen also has very special guests with her for the tour: Nada Surf and The Subways will take over the preliminary program for the anniversary tour.