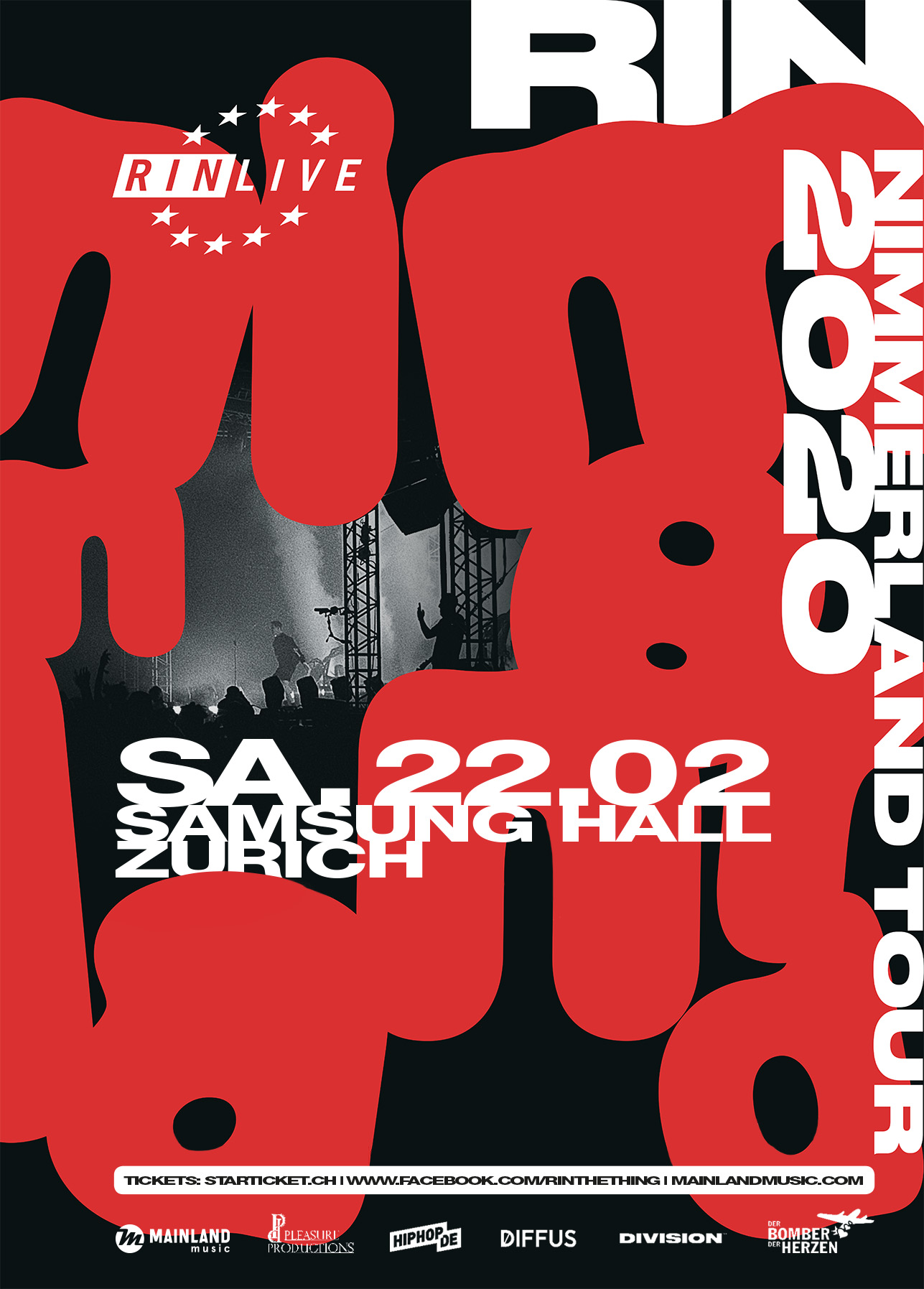 The multiple gold and platinum German rapper RIN comes to Switzerland at the end of February.

The multiple gold and platinum German rapper RIN comes to Switzerland at the end of February. Tickets will be available from 1 January 2020 at 2 pm at Ticketmaster.CH.

In just two years, RIN has managed to become a star and mouthpiece for a generation from a rap newcomer. After its sold-out indoor tours and the mixtape “Planet Megatron”, RIN 2019 was not only at festivals like the Melt! and Dockville, but held its own open air in the summer. For 2020, he was confirmed as the first headliner for the Splash! Festival. His new album “Neverland” was released in early December. RIN took the time for the album. He wants to show people that it is still worth putting love in music. „Neverland“ is everything he has and what he is.

Four gold and four platinum awards for songs such as „Bros“, „Monica Bellucci“ and „Dior 2001“, the 1LIVE crown for the album „EROS“ – in just two years RIN has become a rap newcomer to a star and mouthpiece entire generation. Nobody has the radio rotations and playlist pole positions with his hits as sure as the rapper from Bietigheim-Bissingen.

RIN has also set new standards live over the past 24 months: After over 100,000 tickets sold for the sold-out indoor tours to „EROS“ and the mixtape „Planet Megatron“, RIN 2019 was not only at festivals like Melt! and Dockville, but held its own open airs in the summer and gives a final concert in December in the Hanns-Martin-Schleyerhalle in Stuttgart. RIN has just been confirmed as the first headliner for the Splash! Festival 2020. Before that, RIN released his new album „Neverland“ on December 6th of this year.

Of course, RIN could have made it easy: go to the studio quickly for a month between the indoor tour and the festival season. Two and a half hands full of beats from the usual suspects, the same number of iPhone notes, a few night shifts and then dropping a song week after week, then adding the album. Like everyone. But RIN took the time. Because he wanted to do it differently. Not a safe track and scheme F, but the antithesis of the fast-moving times that are so often cited. „I wanted to show people that it is still worth putting love in music.“

RIN has always done that. Be it on first songs like „Ljubav / Beichtstuhl“, which revealed a melancholy that had long been forgotten, or on his debut album „EROS“, the absolute alternative to the state of the art of the scene at the time, which he countered with intuitive lines and lightness. Even more: this debut gave German rap a new sound, a new aesthetic and maybe something like hope.

Pursuing your own vision is always a risk. But it was worth it for RIN. „Neverland“ is everything he is and what he has. „This album is my life,“ he says himself. And you can hear that. Everything comes together here: from Hollywood longing to front row at Paris Fashion Week. Precious metal and ecstatic fan masses. But then again: Back to Bietigheim-Bissingen, to the brothers. Small town, big place. Views from the 7432