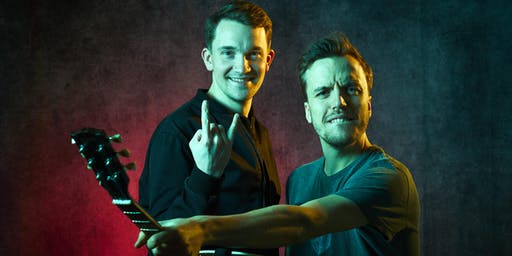 The rag pack was created in 2012 in a Danish holiday home. Max Kennel and Jonas Meyer want to make fun guitar music together. A year later, the

The rag pack was created in 2012 in a Danish holiday home. Max Kennel and Jonas Meyer want to make fun guitar music together. A year later, the duo released their debut album “Steil-Geh-LP”, the follow-up album “Steil II” in 2015 and two years later the first full studio production “The future is big”. After „The future is big“ and over 50 sold-out concerts, „A bitter disappointment“ now follows: The album should become even bigger, more courageous, more musical – and if all of this doesn’t work, you can still refer to the title. Disappointment, the passive-aggressive anger of the millennial, the feeling of the «First World Problem», as a leitmotif? Naturally. Because you are permanently disappointed when you have it so easy, but would like it to be even easier. And this disappointment – viewed from an ironic distance – offers enough scope for jokes. Das Lumpenpack now draws from the full on the new plate. Various studio bands and renowned producers support the duo to reproduce the wit of their songs on a musical level. Stylistically, the two have left all conventions behind. College rock, trap, Balkan pop, they use the genres more freely than ever, but never purely parodying, but always as a tongue-in-cheek homage. With this mixture of singer-songwriter pop, brute humor, wit and plenty of confetti, The Lumpenpack has won various contests and prizes in recent years, its hit “Guacamole” has been clicked 16 million times, they are guests in a wide variety of TV formats, at music festivals and play several sold-out concerts.

Just a word and a tone is enough and you immediately know what it is about. The songs by Ben Pavlo are direct and pointed, come from the middle of life and land right in the heart. In a non-chalante and yet singingly unique way, the catchy songs of the 27-year-old musician meander through a jungle of emotions and grate along the hearts of the listeners. Here the empathy is forced to be sown broadly. Ben’s voice is serious and yet soulful, a lone fighter who doesn’t try to prettify things with relentless honesty. It works wonderfully in pop, but still brings with it a depth that is often missed by similar artists. As a small bonus, the musician sees his craft, so he produces, writes and records all the instruments of his songs himself.