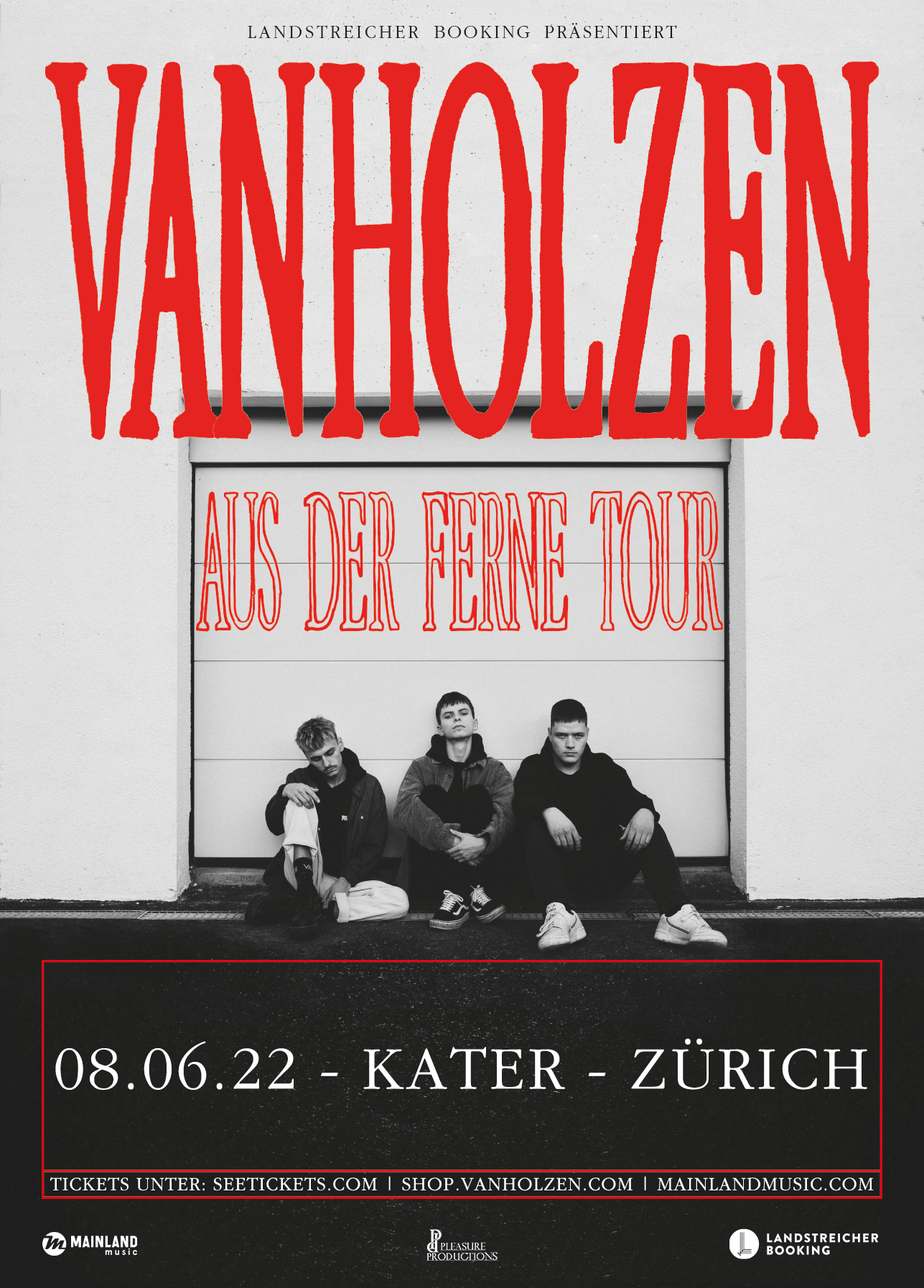 Van Holzen’s show on November 18, 2021 at Kater Zurich has to be postponed to June 8, 2022. Already purchased tickets remain valid.

Van Holzen’s show on November 18, 2021 at Kater Zurich has to be postponed to June 8, 2022. Already purchased tickets remain valid. More tickets are available from Seetickets.

we are postponing our „Aus der Ferne“ tour to next year. We thought about it for a long time, followed political signals, waited and finally came to the conclusion that there was simply not enough planning security to play the tour in the form we wanted this year. It’s not easy for us after such a long time without concerts with you, but we believe that next spring the situation will be more certain, transparent and relaxed for all of us. You know how it works: Of course, all tickets remain valid or can be returned where you bought them.

All information about the postponement and frequently asked questions can be found here: https://landstreicherbooking.de/van-holzen-faq.

The album will be out on November 12th, 2021 – maybe we’ll think of something at short notice how we can play the album to you in the weeks after on a small scale with the restrictions that will then apply and less planning risk. We will keep you up to date.“

VAN HOLZEN are back – „And puke as far as I can“ sings singer Florian Kiesling in „Schlafen“ with a similar attitude with which the band has faced the masters of this world at least since the band was founded in 2015. Competitive morale that leaves only losers behind. A circumstance that the alternative rock band still feels obliged to propagate in 2021.

Perhaps it takes a privileged place like Ulm, the hometown of the trio, to get a reflected, critical look from afar at the events and conditions in the world and society. Florian Kiesling, Jonas Schramm and Daniel Kotitschke grew up there without being exclusively inspired by other rock music as a classic rock line-up. Because in a diverse world in which we are more and more connected to each other and at the same time isolate ourselves more and more, many different types and outlets are needed, for different people, with different feelings. The emotionality and energy that characterizes rock music can be found in modified forms more and more in new music of popular genres.

And so VAN HOLZEN today also draw their inspiration from pop, rap or indie music and use their instruments to generate a unique and versatile sound that knows how to surprise beyond supposed genre boundaries. In any case, the songs arise primarily from their personal feelings, which grow in them when they look out of said privilege at a world full of injustice, catastrophes and their challenges. Songs in which the band finds an outlet for their strongest emotions: fear, doubt, anger, but again and again hope, understanding, mindfulness, (self-) love, the focus on the good and strengthening it.

After a good five years of band history with over 300 concerts played, including three headliner tours, nominations and award ceremonies, two studio albums „Anomalie“ (2017) and „Regen“ (2019), including placement in the top 50 of the German control charts VAN HOLZEN are still in their early 20s in 2021, but now they know very well what they want and don’t want.

The band now takes over many sub-areas themselves and only gets those people who speak their language in small teams. Manual work is more complex – but worth it. Basically exactly what they have always expressed in their music: artistic freedom instead of dependency, in a small circle instead of in the big machine, together instead of against each other – „I dream of a life that nobody rules.“